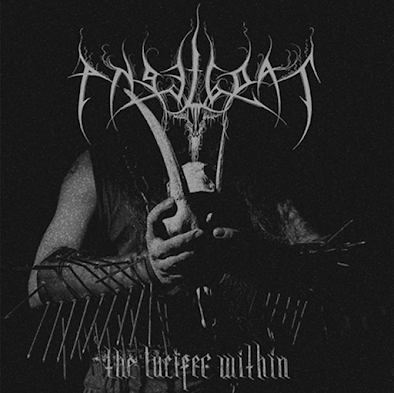 The Serbian elite known as Angelgoat return with their third full-length album entitled, The Lucifer Within, offering 10 tracks of filthy old-school black metal that goes straight for the jugular. The band employs devilish pounding drums, evil shrieking vocals, and a blasphemous guitar tone that makes angels weep. Those seeking sumptuous production values and pretty melodies better stay clear as Angelgoat unleashes a barrage of primitive metal that pulls you straight into the abyss. The music itself is pretty basic and derivative, but what they lack in terms of originality, they sure as hell make up for with pure evil devotion and well-executed songs. Stylistically, they give nods to Bathory, Kreator, Poison (Deu), Mayhem, Archgoat, etc. This is traditional black metal in the purest sense that doesn't pander to any wimpy trends. Those with an affinity for the uglier side of black metal (particularly Deathcrush era Mayhem) will no doubt enjoy this output, as the band plays a kind of metal that transports you back to the genre's heyday.

By Hexetomb - 10/15/2020
Email ThisBlogThis!Share to TwitterShare to FacebookShare to Pinterest
Labels: Reviews